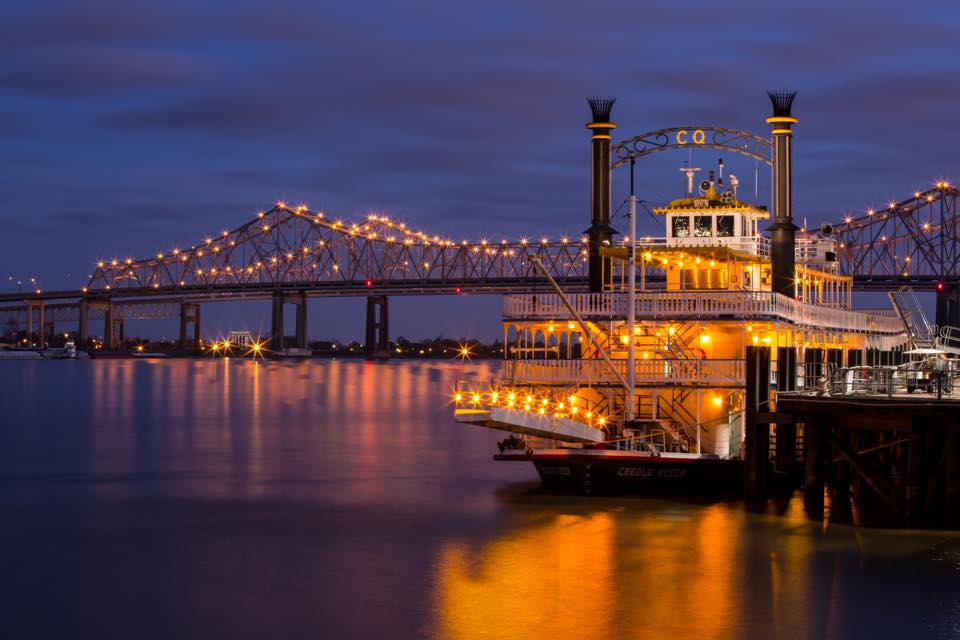 The upcoming Independence Day weekend is shaping up to be spectacular, filled with special events, fireworks, and — this being New Orleans — great food and music. If you’re planning to spend yours in the French Quarter, here are some things we suggest for you, your friends and your family to do.

Kick off the festivities with Go 4th on the River celebration, featuring a free Dueling Barges fireworks show over the Mississippi River at the Riverfront at 9 p.m. Pick up a muffuletta from Central Grocery on Decatur Street, or an “All That Jazz” po-boy from Verti Marte on Royal (we also heartily recommend the Cuban sandwich); and set up a picnic by the river at the Woldenberg Park while you wait for the fireworks.

There’s plenty of grass and benches, as well as street performances along the Moonwalk, which is a walkway named for former New Orleans mayor Maurice “Moon” Landrieu. Watch the boats go by and take in the public art that liberally dots the space.

Another option is to book a steamboat cruise on the Mississippi River and watch the show from the deck while you party. Creole Queen‘s Fourth of July Celebration Cruise boards starting at 7 p.m., and includes an open bar, a buffet, and lots of music (DJ, piano, and jazz band in three different rooms). The buffet’s menu is posted on the company website. Billed as “American favorites,” it includes BBQ chicken, pulled pork, corn on the cob, and apple pie. Tickets are $129 for the adults, $69 for children 6-12 and $20 for kids 3-5.

Don’t want to commit to a cruise? Take a ferry across the river to Algiers Point for $2. A great view of the fireworks is guaranteed — en route and from the other bank.

While you are at the Riverfront, you can’t miss the French Market across the street. The best way to experience it is to walk through its open-air mall, starting with the food stands and ending at Esplanade. As the oldest continually operating public market in the country since 1791, the French Market has a structure of a traditional European market. It covers roughly five blocks, from Cafe du Monde on Decatur St. across from Jackson Square to the daily flea market at the end of Esplanade Avenue.

The flea market has local arts and vendors from all over the world. You’ll find souvenirs, handmade art and jewelry, t-shirts, music, and more. Sample local food and cocktails from the food stands or the nearby restaurants sprawling in every direction, or pick up pralines and a beignet mix to take home from any of the surrounding retail shops at The Shops of the Colonnade.

In the mood for more shopping? The Outlet Collection at Riverwalk is an indoor outlet mall hosting more than 75 retailers and restaurants, including Nordstrom Rack and Mike Anderson’s Seafood. It is a short walk/streetcar ride along the riverfront from the French Market.

The Shops at Canal Place are a short walk away from the Riverwalk, featuring dozens of upscale retailers like Saks Fifth Avenue and Brooks Brothers, plus a small food court. For yet more shopping, check out the shops along N. Peters Street, including H&M and Sephora.

Need a respite from the heat but don’t feel like hanging in the mall? The sprawling Harrah’s New Orleans Casino is within walking distance from the riverfront as well, on Canal Street. The complex features everything a large casino could offer. Foodwise, you can get a taste of local food at The Steakhouse or Acme Oyster House. There’s always the buffet, too, of course.

If you don’t mind venturing a bit further away from the French Quarter toward the Convention Center, the Mardi Gras World museum will give you a taste of Mardi Gras with a grand tour of all things Carnival and a free slice of King Cake. Tickets are $19.95 for adults and $12.95 for children ages 2-11. There’s a free shuttle available with designated pickup stops in the French Quarter and downtown if you’re interested in booking a tour (map and contact info on the website).