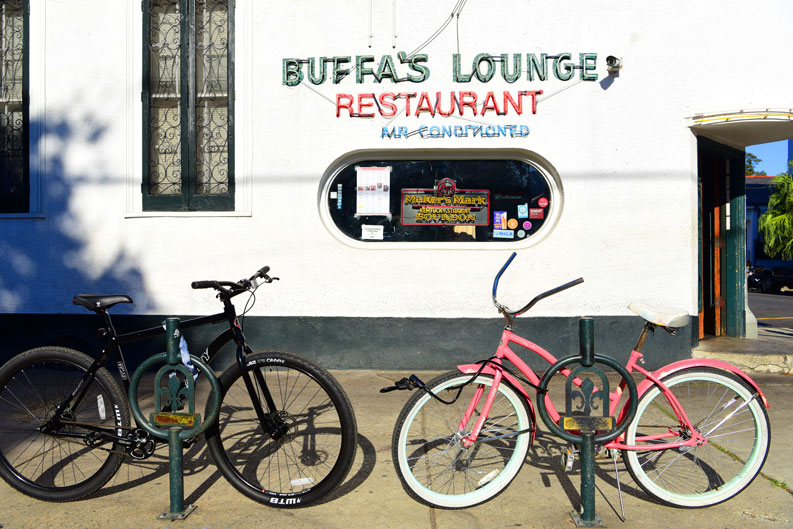 The French Quarter knows no meaning of last call, being open for business 24/7, and that includes quite a few restaurants. Here are a few of our favorite spots where you can eat after 9 p.m. in the French Quarter.

Buffa’s
1001 Esplanade Ave.
Around since 1939, the iconic Buffa’s is perched just outside of the French Quarter on Esplanade Avenue. It’s beloved by locals, has live music in the back room seven days a week, and excellent burgers. The signature Fitzgerald, served between 4 and 8 a.m., is a heaping plate of eggs, sausage or bacon, and toast, but there are Southern classics like shrimp Creole omelet, boudin balls, and deep-fried honey praline ham sandwich too.
Open 24 hours.

Café du Monde
800 Decatur St. (French Market)
This mainstay needs no introduction and will eagerly satisfy your cravings with delicious beignets and a cup of cafe au lait, rounds the clock.
Open 24 hours.

Cane & Table
1113 Decatur St.
Cane & Table made a name for itself with its potent rum-based cocktails and eclectic, Caribbean-influenced small and large plates in the elegant space that evokes Old Havana. Park yourself in the gorgeous courtyard while you try tuna tostada and Caribbean spiced ribs.
Open till 11 p.m. seven days a week.

Clover Grill
900 Bourbon St.
The tile-and-chrome diner has been representing what’s weird and wonderful about the Quarter since 1939. The no-frills food comes under the motto, “We love to fry, and it shows,” but it’s the scene you might want to come for, both inside and outside the diner.
Open 24 hours.

Coop’s Place
1109 Decatur St.
If you want a quick, inexpensive meal any time of day or night, with some local color thrown in, Coop’s Place is unbeatable. Located on the always-busy stretch of Decatur Street, Coop’s is both a divey bar and restaurant with a surprisingly extensive menu. One of the standouts is the seafood gumbo. It comes with Coop’s own dark roux, okra, filé powder, shrimp, oysters, and crab claws. (You can ask for extra seafood.) Follow the gumbo with Coop’s excellent rabbit and sausage jambalaya. Note: No one under 21 is allowed.
Open until 2 a.m.

Cosimo’s
1201 Burgundy St.
This cozy, dog-friendly neighborhood bar mixes up a huge mahogany bar, colorful locals, pool table in the back room, darts, and seriously good bar food like boudin balls and pizza. There are also taco Tuesdays and crawfish when in season. Trust us, this one is a gem.
Open till midnight seven days a week.

Cuñada
833 Conti St.
Cuñada (“sister-in-law” in Spanish) is a tiny family-owned Mexican spot with tacos, carnitas and other specialties plus agave-based margaritas, and a wide variety of Mexican beer.
Open till 4 a.m. seven days a week.

Déjà Vu Restaurant and Bar
400 Dauphine St.
Déjà Vu servs up New Orleans staples like biscuits and gravy, seafood po-boys, and gumbo and jambalaya. Tuesdays and Thursdays are steak nights, plus there are poker machines, a jukebox, big-screen TVs, and plenty of people-watching.
Open 24 hours.

Effervescence
1036 N. Rampart St.
Effervescence opened its tall doors on N. Rampart St. in March of 2017 and has become the destination for high-to-low sparkling wines from all over the world, champagnes, small plates, and live music. The setting is modern and polished, and there’s ample outdoor seating. There’s also a full bar, and dozens of still wine by the glass and bottle. The small plates are meant to be shared — like the Gulf seafood plate or crispy Brussels sprouts. Effervescence is also a good spot to try caviar, from the prized ossetra to the local (and more affordable) bowfin.
Open till 11 p.m. Wed.-Thu.; till midnight Fri.-Sat.

Erin Rose
811 Conti St.
Erin Rose is a low-key watering hole favored by the locals, located just a few doors away from Bourbon Street. Check the memorabilia galore and try the bar’s excellent frozen Irish coffee or a Bloody Mary (made with the house secret recipe). Of course, there’s Guinness on tap plus a selection of local brews. The bar is home to the popular Killer Poboys (look for the takeout window in the back). Everything on the small but mighty menu is delicious.
Open till 7 a.m. seven days a week.

Faubourg Bistro
700 Burgundy St.
Faubourg Bistro is located in the back of the French Quarter’s 700 Club NOLA (you have to order from the kitchen window, just like at Erin Rose). You’ll find the comfort fare of shareable plates like loaded fries and mac and cheese (including skillet-size), plus gourmet sandwiches. Perfect for late-night noshing.
Open till 2 a.m. Mon.-Sun.; delivery available till midnight.

Justine
225 Chartres St.
This stylish and popular brasserie is one of the latest additions to the French Quarter dining scene, opened by husband-and-wife team Justin and Mia Devillier. The high-end late-night menu on Saturdays and Sundays is served till 1 a.m., and includes mussels, onion soup, steak tartare, and other French-centric delights.
Open till 11 p.m. Mon.-Fri.; till 1 a.m. Sat.-Sun.

The Bombay Club
830 Conti St.
Located in the elegant Prince Conti Hotel, the Bombay Club offers some the most refined food you’ll find in the French Quarter after 9 p.m., served among polished wood and high-end cocktails. Small bites include such classics as duck and Andouille gumbo; entrees range from other Louisiana favorites like Gulf fish and shrimp and grits to the European nods like fish and chips. The sheer number of martinis on the menu alone will blow you away, and there’s live music too.
Bar open till midnight Sun.-Thu., till 1 a.m. Fri.-Sat.; Dinner: till 10 p.m. Sun.-Thu., till 11 p.m. Fri.-Sat.

Verti Marte
1201 Royal St.
If it’s late at night and you “need” a po-boy, head on down this tiny 24-hour takeout-only deli on Royal St. with a loyal following. There’s plenty to love on the menu of this bastion of calories, but you can’t go wrong with the epic specialty sandwiches like the vegetarian Green Giant and the mountainous All That Jazz — with grilled ham, turkey and shrimp, plus two cheeses, grilled veggies, and the special “wow” sauce. There’s also the beloved “Mighty Muffuletta.” It’s overstuffed with ham, salami and cheese, but — here’s the catch — it could be served hot or cold. So if you’re not from the cold-cut purist camp and won’t mind your cheese melty and your meat warm, this is one of the best places to try the hot version.
Open 24 hours.