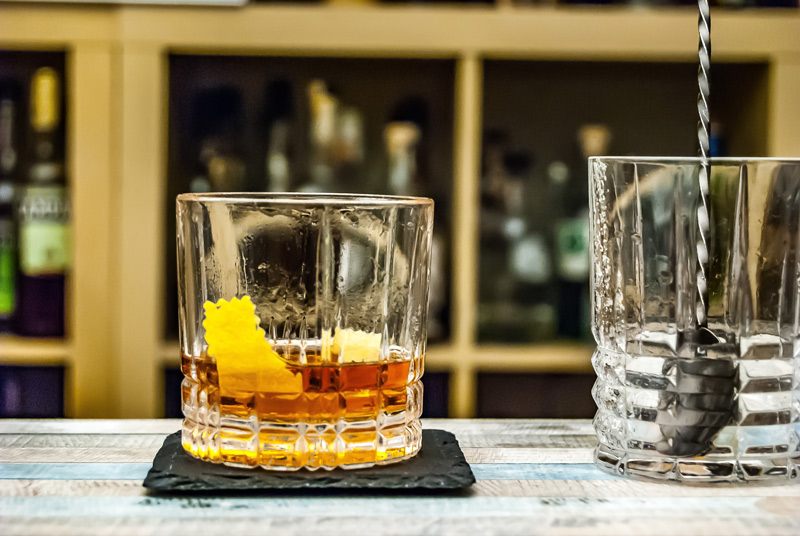 Photo by Johann Trasch on Unsplash

From the eye-openers like milk punch to the decadent absinthe frappe, many of the cocktails you came to know and love (or can’t wait to taste while visiting) were either invented or perfected here. The rich and distinctive cocktail culture of New Orleans is full of history, lore and speculation, perfectly complementing the delicious melting pot of our cuisine. Here’s to the unique concoctions you can find in New Orleans, and the best places in the French Quarter to try them.

What’s in it: Absinthe, sugar, mint, and soda over crushed ice.

Where to try it: The Old Absinthe House, which has invented this drink in 1874.

This deceivingly refreshing, mint-green concoction packs a punch, and there’s no better place to chase the green fairy than at its historic birthplace, the Old Absinthe House, which has seen the likes of Mark Twain and Oscar Wilde among its patrons.

Where to try it: Antoine’s (where it was said to be invented), Arnaud’s, Galatoire’s.

This signature after-dinner drink is way more than just coffee — a lot goes into the presentation, which includes setting brandy and Curaçao on fire and ladling the flaming liquid over a spiral of orange peel. In a nutshell, Café Brûlot involves “burnt brandy,” and it is said to have been invented at Antoine’s in the 1880s and originally made tableside in an ornate copper bowl.

Invented during the World War I by a New York bartender, this cocktail has become a mainstay across New Orleans barrooms. The version at its namesake bar, attached to the iconic Creole grand dame of restaurants, Arnaud’s, is made with Courvoisier VS, sugar, lemon juice, and Moët & Chandon.

Where to try it: Molly’s at the Market, Erin Rose.

Frozen Irish coffee was not invented in New Orleans, but it’s on many menus of the French Quarter bars. Molly’s at the Market and Erin Rose both have become known for their Irish coffee.

Where to try it: Tujague’s.

The Grasshopper Cocktail is a sweet, mint-flavored after-dinner drink which derives its name from the green color lent by crème de menthe. It was created by Philibert Guichet, the former proprietor of Tujague’s Restaurant in the French Quarter. He created the cocktail for a drink competition in New York City in 1919, and it took the second prize. Ever since, the cocktail has been served at Tujague’s and other fine establishments across New Orleans and the country.

Where to try it: Any of the six French Quarter outposts of the “New Orleans’ Most Powerful Drink” inventor, the Tropical Isle. Five of those are located on Bourbon St., and one on Orleans Ave.

The Hand Grenade is truly a Bourbon Street original, and it’s sold frozen or on the rocks exclusively through the Tropical Isle. You’ll see the memorable neon-colored, hand grenade-shaped containers clutched by many a passerby in the Quarter. You might also spot the drink’s own mascot, dressed in an inflatable grenade costume, bouncing along Bourbon Street.

The drink first debuted at New Orleans World Fair in 1984. You can take home the Tropical Isle’s Hand Grenade mix, which is a melon-flavored blend of liqueurs and “secret ingredients.”

What’s in it: Rum (both dark and light), lemon juice, passion fruit syrup or juice. Might include simple syrup, grenadine and orange juice, and (in fancier establishments) such garnishes as pineapple leaves and slices, maraschino cherries, or slices of orange. Served in a tall, signature “hurricane” glass.

Where to try it: The bar that gets the credit for inventing this fruity, bright-red concoction, Pat O’Brien’s.

Pat O’Brien ran a speakeasy in the 600 block of St. Peter street in the French Quarter, until the repeal of Prohibition. Then he opened a bar in 1933 at the at 718 St. Peter street location. During the war, domestic liquor was scarce but rum was freely flowing from the Caribbean islands via the Mississippi River. Long story of finding the right mix of juices and rum short, passion fruit has won as a mixer of choice, and the new (and very potent) drink was served in a glass shaped like a hurricane lamp. These days you can take home of bottle of Pat O’Brien’s signature hurricane mix and a souvenir hurricane glass.

Where to try it: Brennan’s or Galatoire’s, but you can find it all over the city, and several places have their own take on this eye opener.

Milk Punch is a Sunday brunch and winter holidays staple in New Orleans. It’s enjoyed a revival since 1901, when it appeared in The Original Picayune Creole Cook Book’s first edition. It might remind you of eggnog, minus the eggs. And don’t be fooled by its creamy and sweet nature — this boozy milkshake packs a punch.

What’s in it: Pimm’s #1, lemonade, topped up with 7up and garnished with cucumber.

Where to try it: Napoleon House.

The Pimm’s Cup was introduced to New Orleans at the famous Napoleon House in the 1940s. When Emperor Napoleon was captured by the British in 1815 and exiled to the Island of St. Helena, the Mayor of New Orleans famously offered Napoleon sanctuary. This was not to be, but Napoleon House persisted, first being in the Impasto family for 101 years and then purchased by the Brennan family in 2015. Pimm’s Cup, at only 50 proof, was introduced to New Orleans in the 1940s, with a slightly different recipe that its U.K. counterpart. This gin-based, refreshing aperitif has become a summertime favorite in the American South for obvious reasons.

Where to try it: The birthplace of the cocktail, the Carousel Piano Bar & Lounge.

This frothy floral cocktail was named after the bartender Henry Ramos who is said to have invented it in 1888. It was also reportedly the favored drink of Huey Long, Louisiana’s most infamous governor. The Ramos Gin Fizz gets its fizzy part from the combination of orange flower water and egg white, requiring prolonged and vigorous shaking to reach the right texture. Legend also has it that during Carnival 1915, Ramos’s bar employed over 30 bartenders to mix this famous drink, to meet the demand.

What’s in it: Rye whiskey or cognac, bitters, sugar, lemon peel and an absinthe substitute (such as Pernod or Herbsaint).

Where to try it: The Bombay Club, the Sazerac Bar, but, really, many restaurants serve this elegant cocktail.

The origins of Sazerac are somewhat unclear, but New Orleans claims it has invented this very first cocktail ever. Reportedly it was developed in 1838 by New Orleans apothecary Antoine Amedie Peychaud using his special bitters and the Sazerac de Forge et Fils brand of cognac brandy (hence the name). By 1850 Sazerac was the country’s first branded cocktail, and its popularity hasn’t dimmed since.

Where to try it: The Carousel Piano Bar & Lounge, though you can find it at pretty much any craft cocktail bar in New Orleans.

Bartender Walter Bergeron invented this cocktail in 1938, named after the French Quarter. Bergeron was actually the head bartender of a hotel’s cocktail lounge. Basically this is the New Orleans’ take on a Manhattan.

Where to try it: Lafitte’s Blacksmith Shop.

The Voodoo Daiquiri is often also called “Purple Drank.” This sweet, grape-flavored frozen daiquiri is the signature cocktail at Lafitte’s Blacksmith Shop, which has been operating since 1722, making it not only one of the oldest structures in New Orleans but also one of the oldest buildings that serves as a bar in the nation. It is said to have hosted the infamous privateer Jean Lafitte and his posse. Beware: The drink is super potent. Just look at the ingredients!