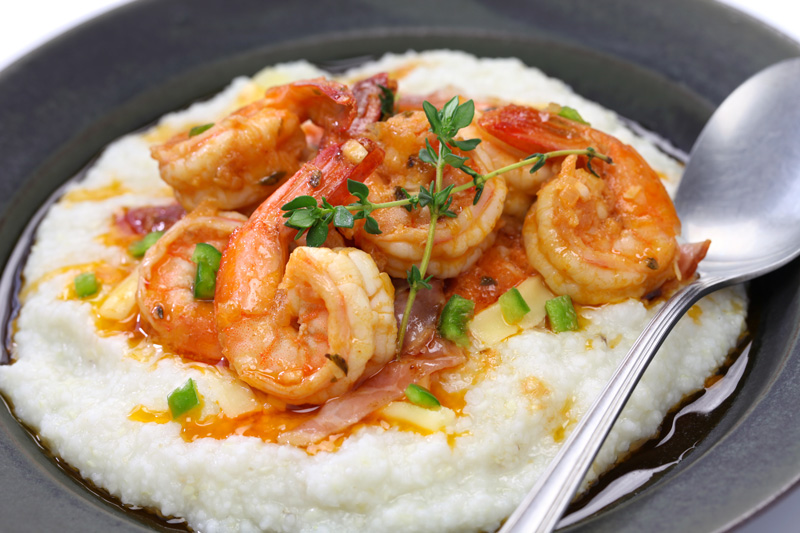 Brunch is usually meant to be a lingering, boozy affair, but New Orleans takes it to a new level with a slew of jazz brunches, classic cocktails and decadent Creole fare. Many local restaurants offer special weekend brunch menus, often accompanied by live music, and seat as late at 3 p.m. Bottomless mimosas and build-your-own-Bloody-Mary bars are a thing, and your eggs and waffles will arrive at the table covered with decadent sauces, Gulf seafood, and other deliciousness.

From the iconic Creole grand dames to contemporary wonders helmed by the award-winning chefs, you can easily find tasty renditions of the New Orleans and southern staples on many local brunch menus. Here are our suggestions for the French Quarter and nearby.

We don’t need to explain this Southern classic, which you can spot on many menus of the French Quarter restaurants, from downhome diners to the white-tablecloth veterans alike.

Where to try it: You can pair your biscuit and gravy with pork shoulder Benedict at the charming Sylvain, or head to the Marigny to sample a delicious version topped with andouille sausage at Cake Cafe & Bakery. It’s worth the trip for all the fresh-baked goods, glorious omelets, and $1 cupcakes.

This Southern staple is also on the menu of the CBD-based Willa Jean (near the French Quarter, and a must if you’re a biscuit enthusiast). Helmed by chef Kelly Fields, Willa Jean also doubles as a bakery, and the biscuit is served six different ways (look for “The Biscuit Situation” section in the menu).

The egg-and-cheese version of this local staple, a breakfast po-boy also comes with smoked sausage, ham, and veggies. It’s served on French bread, of course.

Where to try it: Cafe Conti‘s version features cheddar as the choice of cheese and a variety of sides like grits or fresh fruit. Vacherie’s weekend brunch menu also has one, which comes with breakfast potatoes. Vacherie has other Louisiana standbys like eggs served with fried green tomatoes and crab cake Benedict, accompanied by the brunch cocktail classics like brandy milk punch and bellinis.

Before avocado toast and bottomless mimosas began showing up on the brunch menus everywhere, there was chicken and waffles. Simple, satisfying, and as Southern as they come, this dish can be found all over the French Quarter.

Where to try it: The standouts include Saint Cecilia at the French Market, which serves its version all day and with fruit, and The Original Pierre Maspero’s on Decatur St. nearby (Maspero’s version features a honey Tabasco glaze). The buttermilk waffles at Creole House are super fluffy, or try Cafe Amelie’s take, where the chicken is roasted, not fried. Cafe Amelie also has one of the most beautiful courtyards in the French Quarter (and the bar is very, very high).

Don’t let the name confuse you — this is not a dessert but rather a savory dish — a blend of fresh crabmeat, pecan crust, mushroom sauté, and Creole meuniere.

Where to try it: At the Palace Cafe, which is part of the Brennan’s group of restaurants and has one of the few sidewalk dining options in the Quarter. Crabmeat Cheesecake is Palace Cafe’s signature dish, and you can find it on the restaurant’s jazz brunch menu along with other New Orleans lunch and brunch mainstays like shrimp remoulade.

Where to try: At Antoine‘s popular jazz brunch, along with its famous oysters Rockefeller and shrimp remoulade. You’ll also find eggs Benedict and Florentine on the brunch menu. Eggs Florentine is also poached eggs topped with hollandaise sauce, like Benedict, but served over creamed spinach.

Pain Perdu means “lost bread,” referring to the dish’s ability to resurrect stale and otherwise lost to most purposes bread. For this version of French toast French bread is soaked in eggs and milk and then fried (sometimes deep-fried) or grilled, which results in a crisp and buttery exterior and a soft and custardy inside.

Where to try it: Chef Scott Boswell created a very popular Bananas Foster French toast for Stanley’s breakfast and brunch menus (served all day). The battered French bread is topped with sliced bananas, toasted walnuts and Foster sauce, and served with vanilla ice cream. This is of course a nod to the classic Bananas Foster dessert, which originated at New Orleans’ own Brennan’s Restaurant and is still its most-ordered item.

A locally owned mini-chain with one location at the edge of the French Quarter on Canal St., Ruby Slipper hits all the right notes when it comes to brunch mainstays but with a distinctly Louisiana twists. This brunch queen has a version of Bananas Foster pain perdu that fits right in with eggs cochon and the acclaimed house specialty, BBQ shrimp and grits. It’s made with French bread, of course, and is served with rum-flambéed bananas and applewood-smoked bacon. For a lighter version of this dish, head to Meauxbar — the restaurant’s pain perdu incorporates house-made ricotta and comes with whatever fruit is in season.

One of Louisiana’s most famous dishes, excellent gumbo is easy to find in the French Quarter — it just depends whether you like your gumbo with darker or lighter roux, and with meat or seafood (or laden with both). Most restaurants include at least two versions on the menu, the meat and the seafood, and tend not to stray too far from the classic Cajun and Creole recipes.

Where to try it: The Gumbo Shop serves a seafood and okra gumbo that is thick with shrimp and crabmeat; a smoky chicken and andouille sausage gumbo; and even gumbo z’herbes, a rarely-seen vegetarian gumbo made with greens. Cup-sized portions are available for easy sampling. Gumbo Ya-Ya, a house specialty at Mr. B’s Bistro, is a Cajun country-style gumbo made with dark roux, lots of Creole spices, chicken, and Andouille sausage. (Pair it with Mr. B’s legendary BBQ shrimp, which comes with French bread for dipping, and a bib).

This flavorful one-pot, rice-based dish is right up there with gumbo when it comes to the well-deserved international fame, and can be found in many French Quarter restaurants. This staple traditionally incorporates stock, meat, seafood, long-grain rice, and vegetables (like the “holy trinity” also used in gumbo — bell pepper, onion and celery). The main distinction is that the Creole version has tomatoes and the Cajun recipe does not.

Where to try it: One of the best versions you can find in the French Quarter is served at a local watering hole on a busy block of Decatur St., Coop’s Place. Coop’s Cajun-style rabbit and sausage jambalaya can be upgraded to “supreme” by adding shrimp and tasso, a spicy Cajun ham smoked on premises. No reservations are accepted at this casual joint, and no one under 18 is allowed inside because of the video poker machines.

To sample jambalaya in a more upscale setting, try the version cooked up at the Pelican Club, which adds clams, mussels and crawfish to the traditional ingredients of sausage, chicken and shrimp. If you just want a taste, the spicy jambalaya at Napoleon House comes with chicken and sausage and could be ordered as an appetizer or as a side. Consider pairing it with the restaurant’s famous muffaletta and washing it down with its signature drink, Pimm’s Cup. And the New Orleans Creole Cookery has a vegetarian version, not something many restaurants offer.

This iconic Louisiana dish is served on many lunch and brunch menus in the French Quarter, with local chefs often adding their own twist.

Where to try it: Cafe Amelie’s beloved shrimp and grits is served with corn and andouille maque choux, a winning bet right there. Mr.B’s Bistro wraps its shrimp in bacon, and Salon by Sucre offers its specialty grits with a choice of shrimp but also crawfish or mushrooms.

This Louisiana classic is considered a delicacy in many cultures across the globe. The silky Creole version, served with a touch of sherry (and sometimes with grated or chopped egg, and more sherry tableside), can be found in many classic New Orleans restaurants that serve Creole dishes, including, famously, Commander’s Palace and Brennan’s.

Where to try it: You can enjoy the old-world Creole decadence, along with its legendary turtle soup, at Arnaud’s Sunday jazz brunch, which features Dixieland and a prix fixe menu. Court of Two Sisters also offers turtle soup on its everyday jazz brunch menu, along with a sumptuous spread that includes Louisiana classics like grits and grillades, a seafood buffet, and a carving station. Want a view of Jackson Square with your turtle soup? Muriel’s got you covered with its elegant weekend brunch, accompanied by the sounds of live jazz music and a Ramos gin fizz or a Sazerac.